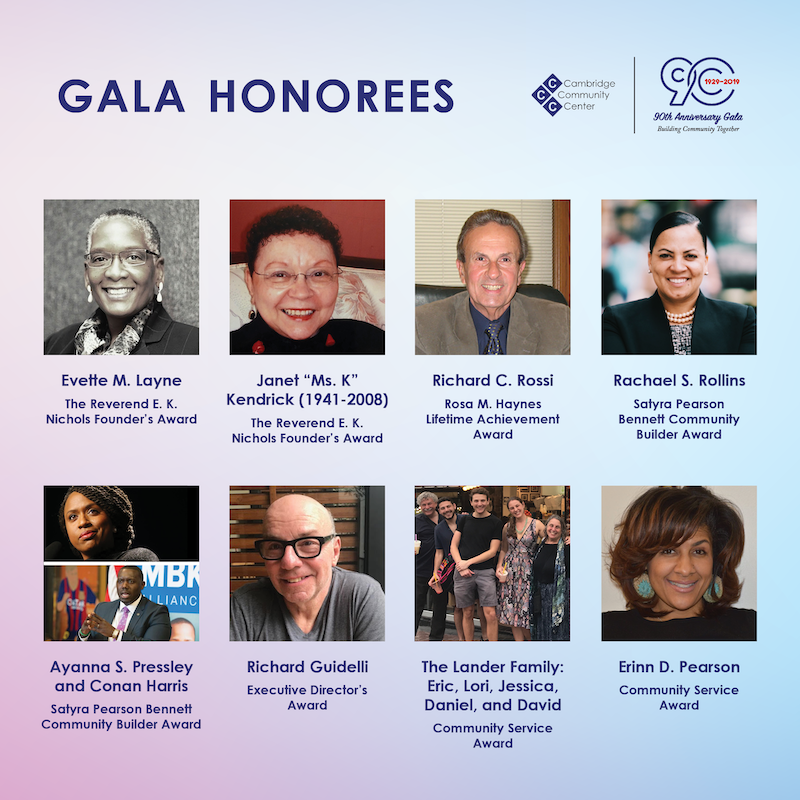 Awardees
THE REVEREND E. K. NICHOLS FOUNDER'S AWARD
Ms. Evette M. Layne
Director, MIT/Wellesley Upward Bound Program, Massachusetts Institute of Technology
Evette M. Layne, Director of MIT/Wellesley Upward Bound at MIT, has helped hundreds of low income students from Cambridge Rindge and Latin School prepare for, apply to, and excel in college. For over three decades, she has molded the future of her students and impacted not only their lives but entire families and communities. We are inspired by Ms. Layne's enduring commitment and service to CCC and Cambridge, serving as a champion for underserved children, youth, and families.

Ms. Janet "Ms. K" Kendrick, 1941-2008 (posthumous award)
Executive Director, Cambridge Community Center
It is with a profound sense of gratitude and love that we recognize in memoriam Ms. K. She was a longtime CCC employee and Executive Director from 2000 until she passed away on July 14, 2008. Anyone who knew her can attest to the love, selflessness, and deep passion Ms. K had for CCC and our city’s children, youth, families. She was a force to be reckoned with—tough yet loving, serious yet funny. Ms. K was a champion for CCC. We miss her dearly and remain grateful that she lived and served among us.

SATYRA PEARSON BENNETT COMMUNITY BUILDER AWARD
The Honorable Rachael S. Rollins
District Attorney, Suffolk County, Commonwealth of Massachusetts
Elected with an irrefutable mandate to reform the criminal justice system, Suffolk County District Attorney Rachael S. Rollins has always been a history maker and force to be reckoned with. The political courage, deep moral conviction, and humility to which she carries out her work daily as one of the top law enforcement officials in Massachusetts is nothing short of refreshing and inspiring. We’re proud to call DA Rollins, her daughter, nieces, and many of her relatives "Center Kids."

​The Honorable Ayanna S. Pressley and Mr. Conan Harris
U.S. Representative (D-MA7) and Principal, Conan Harris & Associates
They’ve defied the odds, informed joy, inspired change, and lit paths for those often unseen and unheard. Whether it’s Representative Pressley's work crafting policy initiatives that invest in healthy women, children, and neighborhoods, or Mr. Harris's work in reimagining manhood and breaking cycles of violence and trauma, they build community and break glass ceilings wherever they go.
​
EXECUTIVE DIRECTOR'S AWARD
Mr. Richard Guidelli
CCC Board Member and Partner, Gilman Guidelli & Bellow
For 16 years, entrepreneur and philanthropist Richard Guidelli of Gilman, Guidelli & Bellow, has served as a champion of CCC as a member of our board of directors. A faithful steward of and strong advocate for CCC, Mr. Guidelli is retiring from our board this year. We thank him for pouring his heart into strengthening CCC and helping ensure that we have the resources needed to carry out our work serving children, youth, and families.

COMMUNITY SERVICE AWARD
The Lander Family: Eric, Lori, Jessica, Daniel, and David
Eric, Lori, Jessica, Daniel, and David Lander exemplify some of Cambridge's best qualities. Their passion for service through art, science, philanthropy, politics, education, and much more inspires us all to think, feel, and do better. We're proud of and encouraged by their irresistible passion for service to others. Often times, we struggle to identify something that the Landers are not involved with.